3
After a tired road journey to Prague, we felt completely rejuvenated in our apartment. The morning dawn sneaked in and out, through the curtain panes, suggestively of a peek-a-boo game ahead. The magic of the ‘Old Town’ of Prague that followed that day, lives and resonates ever since our stay.
*** Dawn of freshness ***
Glancing the view outside the window pane, the sight was simply unbelievable. The ephemeral dew drops lazed their last on the tips of the leaves while the odd white cloud appeared to have the effrontery to face the mighty sun. The morning was bright and as it cast its shine on the grass it added a magical hue to it. I had been to Europe before, but trust me, had never seen the freshness of that like, ever.
Curiosity overwhelmed, and to satiate that frame of freshness, I put the jacket over the shoulders, and as I punched the access card for the front gate of the apartment, the view just took me off my feet.
Dawn of freshness that I had just glanced from the apartment window soaked me within. As quiet morning walkers passed by, I realized what a beauty lay ahead. Every frame of Prague was worth the visit, well literally even before it had begun. After a continental breakfast in our apartment kitchen, we headed to explore the mesmerizing beauty of the Old Town.
*** A Walk to remember ***
As we climbed uphill from our apartment, for the Old Town. We passed through a wonderful garden in the heart of the city around Karlovo Namesti and should say,it had a decent walkway too.

We spent some time feeling the beauty and the verve of Prague. With some offices in vicinity, it made up an eclectic mix of office goers and toddlers enjoying Sun. We decided to walk our way to Old Town instead of taking a Tram. It was a judicious decision, as we crossed some of the most breathtaking and beautiful Gothic architecture along the 3.5 odd kms. linear track enroute.

*** The Krown Conundrum ***
The night before, Krowns had already turned out to be an issue, so to avoid any similar sorry situation, we hurried to the first ‘money changer’ that passed, and exchanged some Euros.
As mentioned in some earlier posts of this blog, currency exchange is an important consideration in Czech Republic. Though Euro is widely spoken to be acceptable, one will invariably end up getting better deals through Czech Krowns (CZK). The train and bus network would also insist on the Krowns. The thumb rule (as in Sept 2013) was that if you get anything above 24 Krowns for a Euro it’s a decent deal.
*** The Old Town Square***
Ideally, atleast a day can be devoted to the Old Town to feel its magic. The cobbled streets of the town are as inviting as the roof steppes of its marvelous Gothic Architecture. The Old Town is house to several historical streets and monuments. The most famous among all, however, is ‘The Old Town Square’.

The Square lies between Charles Bridge and Wenceslas Square. Historically, the Old town, was separated by river Vltava (Over which Charles Bridge is constructed) forming precinct on one of the sides. The river still flows with its immense virility. Charles Bridge can offer some breathtakingly gorgeous views of Vltava. Especially around the hours of dusk. (There are some river cruises also available, but then, you’ll get far better cruises in Austria and Germany, so better to avoid the cruise part here in Prague if you are planning to be in these neighboring countries.) The best way to explore the Square is to begin early in the day. Earlier the better. The square is abuzz with energy of all the age groups. There are people enjoying their snacks around the array of beautiful flowers.

Kids playing around the large bubbles.

Men manifesting themselves in statues to garner attention by spurt of their activities.

Then, there are people playing wonderful (read : out of world) music(traditional gypsy style) with clinically accurate beats and brave vocals for the space. Last but not the least, there are people simply enjoying their Camelot under the Sun.

*** The Church ***
There is a church in the Square, that is rich with history and vintage. It offers splendid views from its different floors, however access to some floors is paid. The church hosts few marriages too, and we were lucky to spot one. There is a floor hosting an art gallery, the access to which is free. So make most of it and do visit to view the best views of the city. 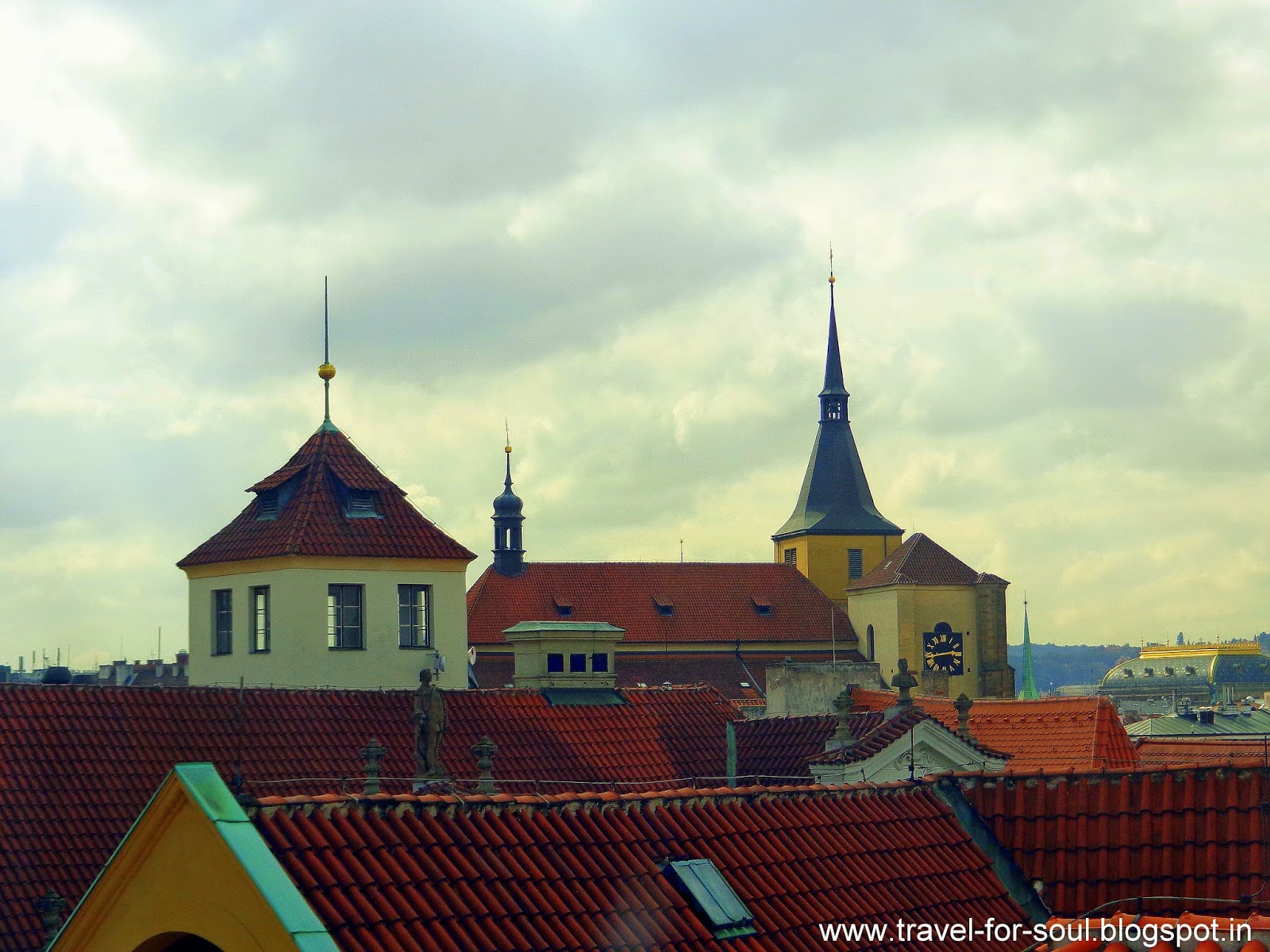 So many so worlds bundled at the Square, that literally the Old Town Square becomes a world of its own.
*** The Old New Synagogue ***
The Old New Synagogue certainly stands out because of its exquisite architecture and unique two-nave design. There’s a quiet and peace associated with the place. The History, the preservation and the surrounding mystery of the place are worthy reasons to visit the place.
*** The Astronomical Clock ***
The Astronomical Clock was the personal star attraction in the Old Town. Undoubtedly, the music that is played every hour is a big attraction for all the tourists alike. The music is different for every hour and is played ‘Live’ on the spot. The atmosphere, the music and the efforts are worth savoring every bit. It will stay with you for long. Large groups of people assemble at the base of the building and wait with a childlike anticipation for the next hourly ritual. Then as if in a military fashion disperse around the Square but not without a huge round of applause, every single time. Also interesting is the fact surrounding the animated figures around the clock. The 4 creatures and their related stories abound the place with magnanimity. No doubts, there are hoards and hoards of snaps being taken of the place.

These four figures are a center of attention for everyone visiting the Old Town. It’s the intellect and the philosophy behind these figures that make them even more special. The first figure is seen holding a mirror, and loosely represent Vanity. The second figure with a bag of gold, denote Greed. The third figure is a clear shot skeleton, figurative of death and the fourth on the right most, is one with music instrument reflecting worldly pleasures. Every time the skeleton or the death rings the bell, all the other figures shake their heads cyclically, symbolic to their being adamant to leave. Beautiful !! 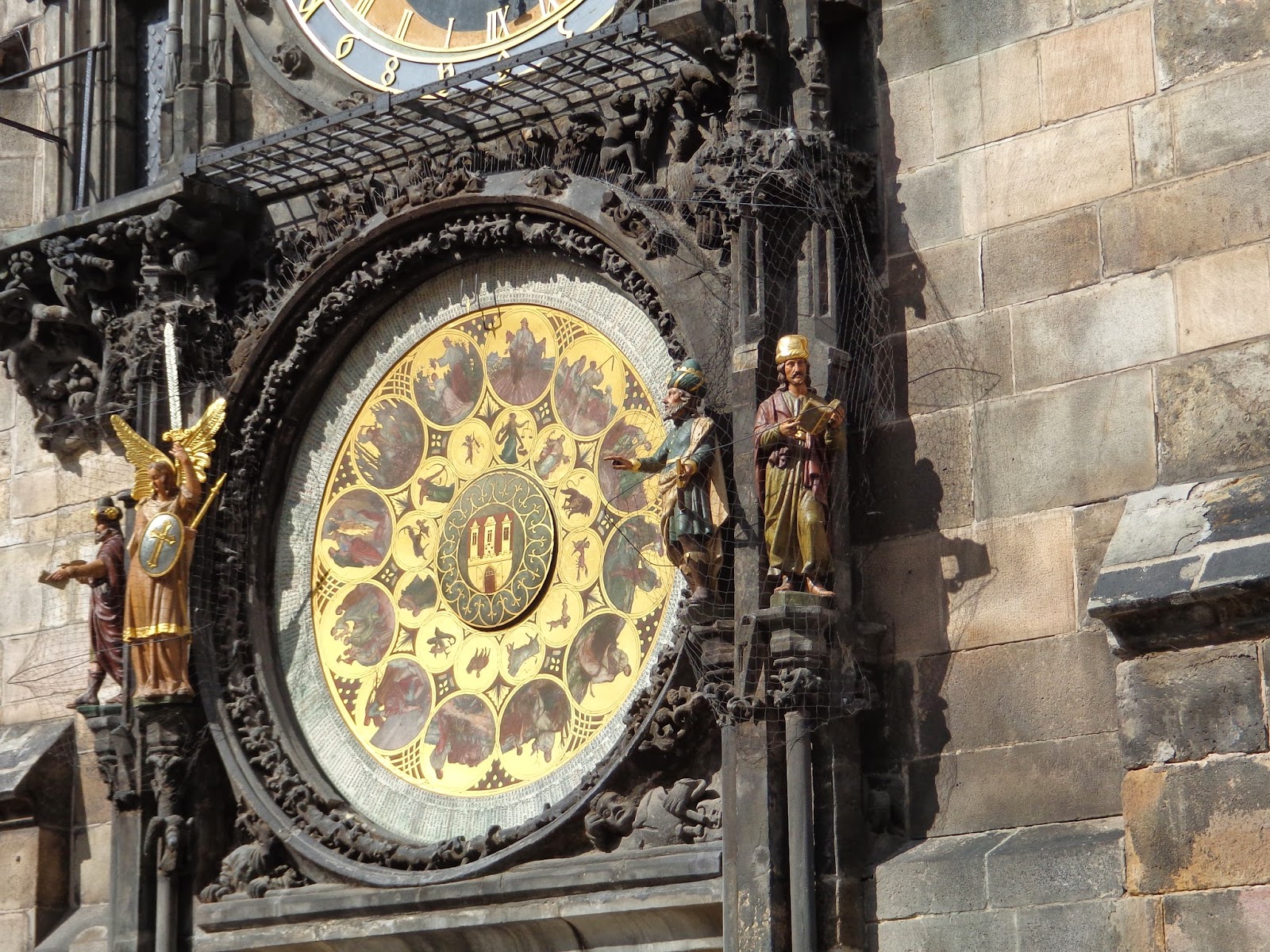 
Around the Square, there are a lot of open sky restaurants and eateries. It is understood that there are special discounted prices for the meals around the time of noon, but frankly I can’t vet the same, as I didn’t try. There are some really good souvenir shops around the Square. Some good ‘value for money’ bargains. Few good shopping streets are also around, so one can head to them after the Old Town Square. Old Town of Prague is really special and its spirit can stay with you eternally.